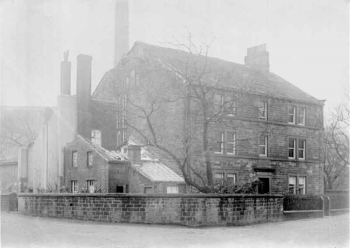 The George was built as a coaching inn around 1793. It was situated at the comer of Mount Road and Binn Road. The George had been delicensed by 1812 when it had become known as Ottiwells House and was the home of William Horsfall, owner of the adjacent Ottiwells Mill. He was murdered by the Luddites on his way home from market in Huddersfield.

An early auction catalogue of Ottiwells House describes it as "A substantial Messuage or Dwelling House near the Tumpike Road leading from Huddersfield to Manchester with a Bam, Stable, Cowhouse and other Outbuildings, Gardens and Yards therewith Occupied". The 1841 census shows the property to be occupied by both William Kinder, a woollen manufacturer, and his family and by John Talents Fisher, a cloth merchant whose household included a footman and other servants.

The property was acquired by Crowthers and demolished by them around 1910 to make way for a bowling green for the enjoyment of their work force.