The best surviving tenter posts in the Huddersfield area are those on Warehouse Hill road just out of the centre of Marsden village.

A solitary tenter post may also be seen near the top of the many steps leading to and from Binn Road where the wide track leads to the Wessenden Reservoirs. This post is the sole survivor of those used by the Top Bank (Top Bonk) mill demolished when Butterley Reservoir was constructed. 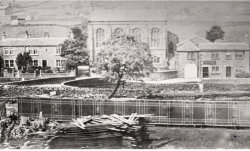 Tenter posts at the bottom of Peel Street

Tenter frames which were sited at the bottom of Peel Street can be seen in the accompanying photograph being used to stretch the cloth woven for shawls.

Tenter frames were often wooden and therefore have not survived. The only surviving wooden tenter frames in the world (which date back to the early 1700s) are to be found in Otterburn, Northumberland. Marsden is fortunate to have the more robust stone upright posts to which were affixed the longitudinal wooden bars to which the cloth was attached on. Others, albeit broken and in a poor state, may be seen in Longwood, Huddersfield on a track leading up from the Slip Inn.

How cottage weavers prepared the wool for cloth making

I thought it would be interesting to look back at the cottage industry of cloth production in the 1800s . My source is Mr. Alfred Easther's "Glossary of the Dialect of the District of Almondbury and Huddersfield" (1883)1.

The weavers would go into Huddersfield, buy 50lbs weight of wool, carry it home, spread it on the house-floor, *strinkle it with oil, layer on layer, then beat it with sticks. Hand cards were then used. "They teased it altogether, and turned it off in a floss state, as they do now by the scribbling machine.

They worked it together in long slivings; it was then spun into rough or fine threads then into warp and woof. The piece when made was spread on the floor. A large kitful of urine and swine's dung was ...strained through straw ...sprinkled on the cloth...as they lecked one piece it was laid down...so layer on layer were placed ...then all the members of the house got up and trambled it." The next morning this smelly bundle was wrapped in a bundle and taken to the nearest fulling mill where it was scoured and "the offensive fluid washed out of it and it was then brought dripping home."

It was next trailed over furze-bushes, hung out upon the walls, and the small pieces pulled off in the bushes whisked from it; then burled in the house by the family...it was taken again to the mill, placed in fulling stocks with soap, by which process it was reduced in dimensions. It was laid ...on a long stone table and stamped by the Government official, who affixed seals to the piece impressed with the length and breadth." The officer was sworn in at Pomfret sessions. Cloth was measured in a now obsolete measure called an ell which was approximately 45 inches in England and 37 inches in Scotland). In the past he had been known as the King's Ulnager/ Aulnager/Alnager a term derived from the Latin Ulna which is one of the bones of the forearm. An ancient measurement was from elbow along the length of the forearm to fingertips

The cloth was taken home and as it "was being fastened to the tenter the family pulled at one end to increase the length and breadth. If it was stamped for (say) fifty yards it would thus stretch to fifty one or fifty two, and shrink again on being finished."

The Reverend Alfred Easther was headmaster of the Grammar School of King James in Almondbury. He had spent many years compiling amongst other things a glossary of dialects in the Almondbury and Huddersfield area. Sadly he died on Monday 25th September 1876 after a long illness and before the work could be published. However,shortly before his death he asked his close friend, the Reverend Thomas Lees to complete and edit his work for The English Dialect Society. Using Alfred Easther's material and other sources available to him this was done by the Reverend Lees and the glossary was completed and subsequently published in 1883.

Read more about tenters at tenters.org