The Huddersfield and Manchester Railway Company bought the canal in 1846 for £150,885, which spelt the end of the canal as a commercial concern. The railway to Stalybridge was opened in 1849, and trade on the canal declined, till it was abandoned in 1944.

Thomas Nicholson was the sole contractor for the construction of the first railway tunnel. In his obituary of 1861 it states,

When the work was in full operation 1,953 men were employed by Mr. Nicholson at one time, this being the highest number. For blasting purposes 102 tons of gunpowder were consumed, at a cost of £5,131; of gun cotton (then a new invention), 168 Ibs., costing £29; and fuses amounting in value to £693 were used.

To give light to the men while at their work 150,798 lbs of candles were burnt, at an expense of £3,618; and to keep the engines in motion and warm the men 8,733 tons of coal were consumed; while for building purposes 2,535 tons of lime were used.

Nine fatal accidents occurred during the progress of the works. The men had a club of their own, to provide against sickness and accidents, and Dr. Broughton, J P., then of Dobcross, but now of Preston and Joseph Hesslegrave, Esq., then and still of Marsden, were selected to be their medical attendants and advisers. The cost of the tunnel was £171,003 5s. 3½d..; upon the approaches Mr. Nicholson expended £30,665, making a total of £201,608 12s. 3½d.

The station at Marsden, which is still in operation, had extensive goods sidings, which were used to supply the mills with coal. 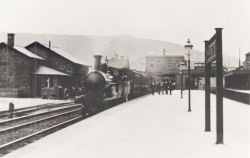 There are three railway tunnels at Standedge. The first was a single track tunnel, finished in 1848. The second, begun at the same time, wasn't completed till 1871. The third tunnel was for a double track, and was finished in 1894. It is 3 miles 64 yards long, and is the tunnel which is used today by the Manchester-Leeds line