We all understand when a friend asks “What’s your tipple”. The origin of the word derives from an early distinction between the necessary rest and refreshment taken by long-distance travellers and the hedonistic custom of drinking for pleasure in tippling houses.

Licences were required for premises selling alcohol. New applicants had to produce a certificate signed by a local clergyman and church overseers which showed that they were “of good Fame and sober of Life and Conversation” Having satisfied the Justices of the Peace of their suitability they were “duly Licensed and allowed to keep a common Inn, Alehouse, Victualling house and Tippling house in the Houses wherein they dwelt for the selling of Ale, Beer and other liquors and strong Waters”. Early inns were not purpose-built but were more accurately a room in a cottage which sold ale that had been brewed in the back kitchen.

Drinking establishments were established from the 1600s along the paths and tracks running through the village from all four points of the compass. 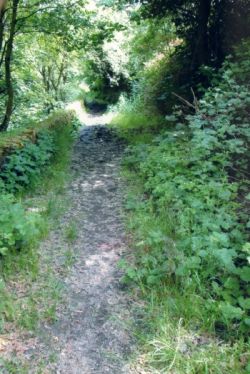 The most important early route to the village centre ran from Huddersfield, over Crosland Moor to Holt Head and then down into the village along a track running near to the present Meltham Road to Market Place and over Town Bridge into Towngate. We know that this bridge was present in 1664 when the inhabitants of Marsden appealed for an allowance towards the cost of the repair of the wooden bridge “over the river at Marsden” which they maintained was “a great way for most of Lancashire and Cheshire”.

The photograph shows the state of these old tracks which were only passable by pedestrians and horsemen or pack ponies.

We have a letter dated 13th January, 1607 written by the 14 year old Joseph Radcliffe to his mother describing the journey that he took with his cousins on horse-back from Huddersfield to their school in Oldham. “We alighted at Marsden and sat there.” It may be that they called at The White Hart in Towngate, pictured below, which had been present since at least 1590.

The rear of the White Hart prior to demolition

He continues “Coming to Pule and Standedge the wind was so boisterous that we could hardly stand and being both cold and some of us half sick we went to Saddleworth on Monday and stayed all night. At noon we set forth and so we came, God be thanked, to Oldham in the afternoon.”

The track over Standedge rounded Pule Hill on its south side.