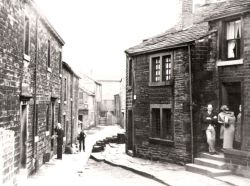 Built in 1774, Planks, pronounced locally as 'Plonks', has been demolished, but lay in the triangle created by the confluence of the Colne and Wessen rivers, in the centre of the village. The site is now occupied by Wessen Court.

Although the whole area was known as Planks, there was a separate alley which ran parallel to the houses, between Planks and the old church, called Golden Alley.

The houses on one side backed up against the river, where there were ash-pits. An area on the opposite bank, still there today, was set aside as a drying area. Planks covered Top o' Street, Roebuck Square (present site unknown).

The houses were all stone-built, 3 storeys, with weavers' windows. It was built for its entire length over a conduit, with a stone archway at the river end (east end). The origin of the name is a mystery.

There was a sweet shop at the top end, by Union Bridge. There may have been a pub called The Roebuck, and there was The Two Dutchmen and The White Hart on Towngate. The graveyard at the back of Planks was used for burials until 1852 The present graveyard was consecrated in 1857. The old church was then used as a warehouse. It was sold to a plumber, on condition that he cleared the site Stone pillars that supported the balcony in the church are now holding up a balcony at 18-22 Colne Crescent.

The population of Planks was mixed. There were those who had been Marsdeners for generations; men who had come to Marsden for work, met a Marsden girl and settled; and itinerant families, often working on the railway or canal.

In the early days, there were people working in all types of textiles - wool, cotton, silk. There was also a wide range of trades, and one woman is listed as a 'Keeper of a Mangle'! Many of the houses took in lodgers as a source of income.

One of the inhabitants of the Planks, William Schofield, was a prominent figure in the Methodist Chapel. He was born in 1820, and was apprenticed to a shoemaker. He became a Methodist in 1839. One source tells us that he was very fond of visiting 'pothouses' before he became a teetotal methodist. He became a coal merchant, and was well-known for his charitable deeds. He was a Sunday School Superintendent for 30 years. He co-founded the Temperance Society. His parents, Henry and Mary Schofield, had a grocery shop in Towngate.

Sarah Langfield aged 39, single, daughter of Edward. Keeping house for him and her three siblings. All born in Marsden. Still living in Planks in 1861 and 1871 on her own.

John and Mary Cordingly. He was born in Ashton-u-Lyne and is a boatman. Mary and their 4 children were born in Marsden. In 1861 John was absent perhaps on his boat but Mary and their son James are present. The older children had left home. By 1871 John and Mary are still living in Planks on their own. John is now said to be a waterman.

Martha Waterhouse, a widow born in Marsden is still there in 1861.

Henry and Mary Schofield, Joiner and Dressmaker aged 36 and 35. Both born in Marsden with no children. Both were still living there in 1861 but by 1871 Mary is a widow still working as a dressmaker. However she has a lodger, David Mellor, aged 40, a millwright.

Samuel Wood, 41 single but living with his two sisters. He is a tailor. By 1861 he is living on his own, still single but described now as a Master Tailor.

Benjamin Holroyd, 37 and 40. Both born in Marsden. They have no children. Benjamin is a grocer. They are both in Planks in 1871 still without children. By 1891 Betty is a widow living on her own at Top o'th' Street (part of Planks).

William Davis, 35 a labourer from Devon married to Alice 38 from Golcar. They have four children all born in Marsden. They are all on the 1871 census with two further children although the enumerator spelled their name DAVICE. By 1891 Alice - back to Davis, is a widow living with her son Alfred and two grandchildren.

Sarah Langfield 37. Her husband, George was away for this census but their five children are listed. Sarah and George, a foundry mechanic and their four youngest children are still there in 1871. By 1891 George is a widower, retired and living at New House.

Alice Parkin, 40, keeping house for her five children aged from 7 to 18; the three eldest are already working in the textile industry. Alice (nee Wood) and her first two children were born in Slaithwaite, the next two in Lingards and the youngest in Marsden. Her husband Thomas has apparently fled the scene and turns up in the 1871 census in Liversedge along with his new 'wife', Mary Ann!

Benjamin Sharp, 33, single shoemaker living with his mother who was born in County Durham. She is a widow. He was born in Marsden. By 1871 he is living on his own and is a widower. In 1891 he had moved to New House.

James and Sarah Schofield nee Sykes aged 56 and 54 lived in Planks with their eight children. Joe, aged 15 and working as a nipper is Ivy Carter's father and Whitfield, their eldest son was Allan' s father.

William Schofield, 30 was living in Planks in 1851. He was a shoemaker married to Hannah also 30, a milliner. They had a son, James aged 4 at school. E.Irene Pearson writes eloquently about him in her book Marsden Through the Ages. P. 18,

'The life of an outstanding member of the Methodist community during the mid 1800' s is told in a book entitled William Schofield written by John Sykes. William was born on April 5th 1820, the youngest of five brothers. He was apprenticed to a shoemaker, and became a Methodist in 1839. At the age of 25 he married Hannah Scawthome. Shoe-making affected his health, so he became a coal merchant eventually.

His enthusiasm was such that he attended all the services and meetings during the week and always tried to live the christian life fully. He was an advocate for the rights of people and had a yearning for the poor, often denying himself to succour the needy. He sympathised with those in distress and willingly ministered relief. He never made customers feel uncomfortable when they were unable to pay for coal. He said 'They' 11 pay when they are able.' In 1854/55 when trade was bad, prices high for food and work scarce he refused to put up the price of coal. During the severe winter he sent a load of coal and some flour to a large poor family whose father was out of work and the mother did a bit of charing.

He was a Sunday School Superintendent for thirty years, capable of interesting children, interested in the welfare of the school, zealous and punctual and always one of those heading the Whitsuntide procession. He was also a member of the local board, a trustee of the Town School and, alongside with Mr. S. Hill, founded the Temperance Society in Marsden. His brother James, who had a greengrocers shop in Marsden, was also an enthusiastic member of the Methodists and gave generously to the Chapel financially.

William had to give up active service to the chapel owing to ill health at the age of 51. Throughout his life he believed in the prevailing power of prayer.'

However D.F.E.Sykes in his book History of the Colne Valley has something more to add. P.249,

'At one time he was addicted to the pot houses.'

He was a companion of William Alderson, mole catcher from Westmoreland who lodged with Henry and Mary Schofield,, Williams' s parents who had a grocery shop in Town Street. William Alderson is on the 1851 census, then a single man of 40, whereas William Schofield, at that time was 30 and, according to Irene Pearson, had converted to Methodism at the age of 19. Sykes adds that James was known as Jimmy o'th'shop. William died on 19.1.1881. He is buried in Marsden churchyard and his inscription indicates that at his death he was living on The Green. His wife, Hannah died 5.8.1897 and their son James died on 2.9.1925. They are both buried in Marsden.

The number of wives in paid employment is interesting. The normal pattern of female employment in the village seemed to be that single girls worked, almost without exception, but that very few did so after marriage. It is possible that the number of working wives can be seen as an indication of the poverty of an area. If this is true, then the relative poverty of the Planks area improved during the 1850's, by 14%.

The number of husband-wife families is low in Planks in 1871 - there were 8 households with no-one listed as 'wife'. The other noteworthy statistic is the number of 'outsiders' - mostly due to the railway, it would seem.

There was a remarkable number of people from outside the area.