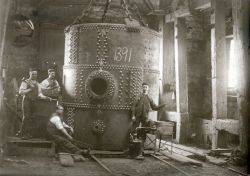 The Taylor brothers, James and Enoch, were blacksmiths on Brougham Road. Enoch Taylor made the cropping frames that sparked the Luddite riots in the Colne Valley. He set up the iron foundry, which later became Ready Carr Mill when it was bought by Crowthers. They attended the Wisdom Seeking Society meetings in a pub at Standedge.

There were three brothers, in fact, although George went to America, claiming republican beliefs. This may have been true of the others, which may explain why their engineering works in Brougham Road (on the site of the present Infant School) were not attacked during the disturbances.

The Taylor family memorial can still be seen next to the site of the old church.