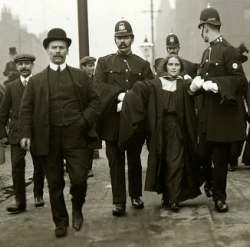 Dora Marsden was born at The Hey in Hey Green in 1882. Her parents were Fred and Hannah Marsden, and Fred was a dealer in woollen waste. She won a scholarship to Manchester University, taught in Manchester, and became a member of the Women's Social and Political Union.

She was critical of the Pankhursts, and in 1907 she helped to form the breakaway Women's Freedom League.

In 1911 she co-founded the journal The Freewoman, because she was disillusioned with the limited scope of the suffragist movement. She advocated free love and communal childcare, and the magazine was banned by W H Smith for immorality.

After resigning as editor in 1914, she spent her time writing books.