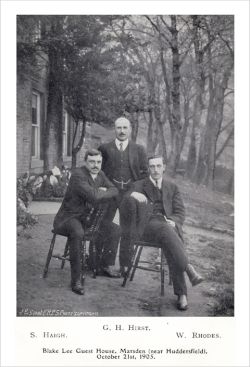 Blake Lee was referred to in 1881 as "the new visiting place, nestling under the shadow of the Marsden hills, which beats Mentone for healthiness, Blackpool for life, Scarborough for gaiety, and the Fairy Glen for river and sylvan beauty". It was kept at that time by John Hirst (Cloth Dealer and Pleasure House Proprietor), his wife Sarah, and his daughters Mary and Amy (Proprietresses).

The Hirsts belonged to the Temperance League, and seem to have enjoyed entertaining such figures as the Mayor and Mayoress of Huddersfield, whose visit was reported in the local press. In 1905 Yorkshire County cricketers George Herbert Hirst, Schofield Haigh, and Wilfred Rhodes - "The Huddersfield Triumvirate" - were entertained at Blake Lee, and a postcard was produced of the occasion.

On one Saturday in July 1881, 400 people visited Blake Lee, 197 of whom were served a "knife and fork tea", presumably in shifts. The visitors included a Huddersfield Adult Class, Waterhead Young Men's Class, the choir of St. Mary's, Oldham, and Wellhouse Band of Hope who came by a specially chartered canal barge.